Fourteen new cases of coronavirus (COVID-19) have been confirmed in Nigeria, bringing the total number of cases to 65.

The Nigeria Centre for Disease Control (NCDC) announced this in a tweet on Thursday night.

A breakdown of the number of the additional cases showed that 12 new cases were discovered in Lagos while the remaining two were confirmed in the Federal Capital Territory (FCT).

Six of the cases were detected on a vessel and three others were returning travellers into the country while the remaining case was a close contact of a confirmed case.

On the other hand, the NCDC revealed that another case had been discharged, bringing the number of persons who have recovered from the virus to three.

Of the 14, 6 were detected on a vessel, 3 are returning travellers into Nigeria & 1 is close contact of a confirmed case 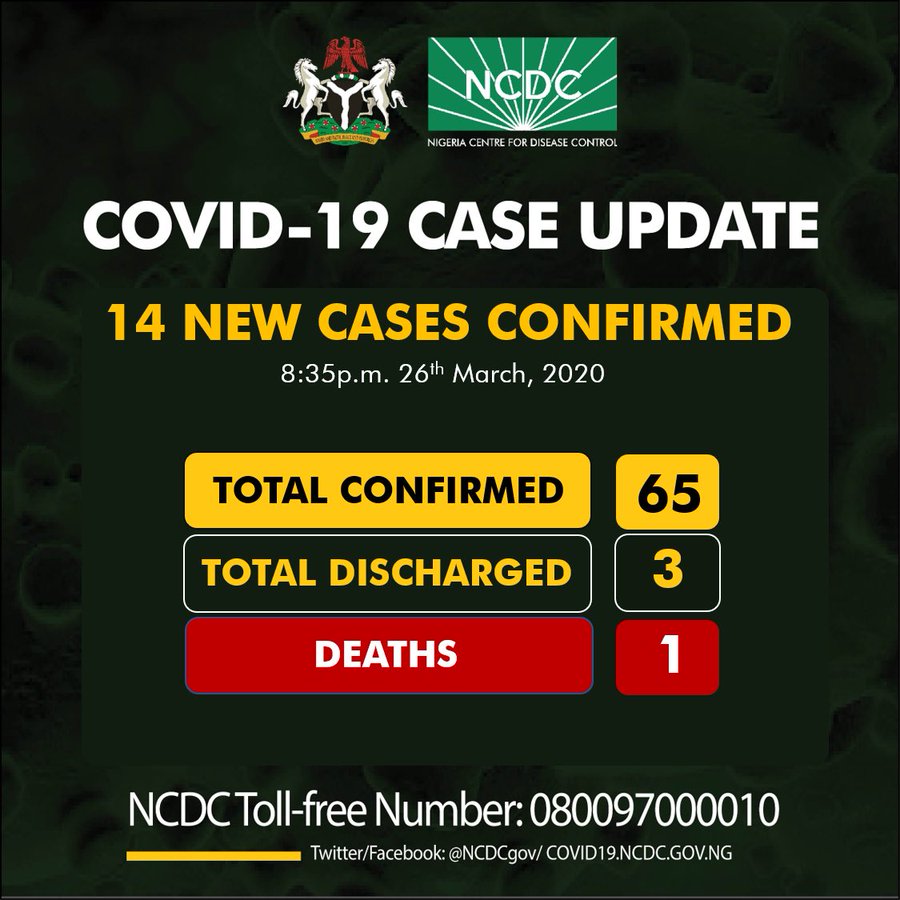 7,615 people are talking about this

Meanwhile, President Muhammadu Buhari has approved the immediate release of N15 billion to the Lagos State government and the Nigeria Centre for Disease Control (NCDC) to tackle the spread of coronavirus (Covid-19) in the country.

In a series of tweets on Thursday, the President explained that the approval followed the extensive briefings he received recently on the state of the nation, as it relates to the Covid-19 pandemic.

He ordered that the sum of N10 billion grant be immediately released to Lagos State to boost the government’s capacity to control and contain the outbreak, as well as support other states with capacity-building.

The remaining N5 billion, according to the President, is to be paid as a special intervention fund to the NCDC to equip and provide personnel to its facilities and laboratories across Nigeria.

He revealed that the Nigerian Air Force was already making its fleet available to the Presidential Task Force on Covid-19, to enable a better coordinated and more effective response.

President Buhari said the initial closure of the nation’s international airports and land borders for four weeks was to ensure that appropriate policies, processes, and infrastructure were in place to cope with suspected and confirmed cases of COVID-19 in the country.

He, however, regretted the inconvenience caused by the flight and travel restrictions to Nigerians abroad willing to return home, stressing that it was for the greater good.

The President thanked all medical personnel in the country for their efforts in curbing the spread of the disease.

He also urged Nigerians to be mindful of those he said were taking advantage of the present situation to spread panic and cause confusion.